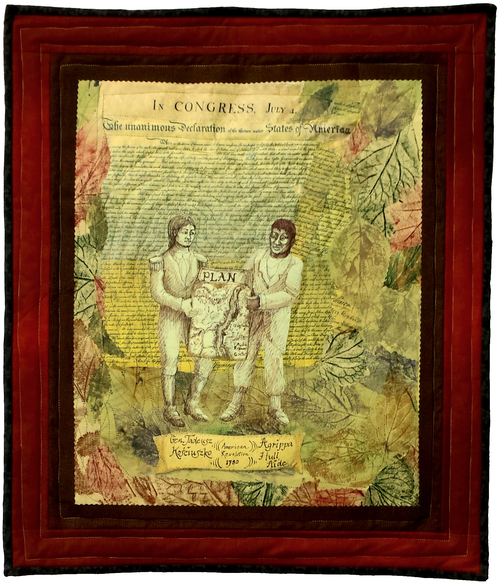 The quilt by the PHC member, Gloria Welniak, won the special prize in the"Kościuszko Friends" category at the 2017 International Kosciuszko Bi-centenary Competition "Tribute to Kościuszko: A Friend of Humanity."

On the backdrop of the Declaration of Independence, the quilt stresses the role of Kosciuszko as a champion of civil rights by presenting him with his aide, Agrippa Hull, a free black enlisted man who became his aide and trusted ally.

KOSCIUSZKO:
A MAN BEFORE HIS TIME

Featured: An exhibit portraying details of Kościuszko's life from Polanki, Polish Women's Cultural Club of Milwaukee, as well as books and the award winning Kosciuszko quilt.

From the American Public Television website: There are more statues of Thaddeus Kosciuszko in America than any historical figure except for George Washington. Every day, millions of New York television and radio listeners hear about traffic jams on the Kosciuszko Bridge. Yet few know the real story of this Revolutionary War hero and champion of human rights. With a moving narration by actor Blair Underwood (ABC's Quantico and Agents of S.H.I.E.L.D.) and re-enactments filmed in Poland, Philadelphia, and West Point and Saratoga, New York, the one-hour documentary KOSCIUSZKO: A MAN BEFORE HIS TIME tells the story of Thaddeus Kosciuszko's quest for liberty — alongside allies George Washington, Benjamin Franklin, Thomas Jefferson, and French and Polish Revolutionaries — against the tyranny of Britain's King George, Russia's Catherine the Great, and France's Napoleon Bonaparte. Based on the book The Peasant Prince: Thaddeus Kosciuszko and the Age of Revolution by Pulitzer Prize-winning journalist Alex Storozynski, the film brings the Polish revolutionary to life with drama tic readings and re-enactment by actor Olek Krupa (F/X's The Americans and Hidden Figures), coupled with interviews from historical experts and former U.S. National Security Advisor Dr. Zbigniew Brzezinski.