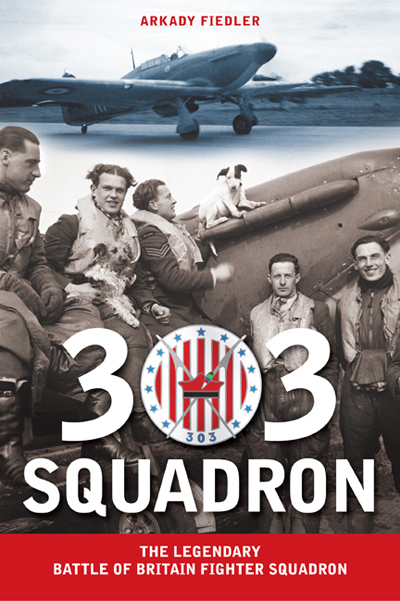 From the Aquila Polonica Publisher: "Thrilling action story of the celebrated squadron of Polish fighter pilots whose superb daring and aerial combat skills helped save England during its most desperate hours. The 303 "Kościuszko" Squadron flew with the RAF, downing three times the average RAF score, while incurring only one-third the average casualties during the Battle of Britain. Underdog heroes who rose to defend against the deadliest German Luftwaffe attacks, the pilots of 303 Squadron were lionized by the British press, congratulated by the King and adored by the British public... "

Adam R. Seipp (Sarmatian Review): "The portraits of the pilots are fascinating by themselves. In the 1943 edition pilots’ names remained concealed for fear of reprisals against families in Poland. This edition includes extensive biographical information about a number of these fliers. Their birthplaces and early careers tell a fascinating story about the changing borders of Poland in the early twentieth century and interwar creation of a Polish military establishment.”

Irene Tomaszewski (Cosmopolitan Review): "A riveting read, it not only tells the story but captures the mood of the epic battle that saved Britain, while it celebrates the daring and honorable young men who really lived by their motto: For Your Freedom and Ours.”

Henry Conigsby (Watford): "The tale of how the second half of that motto turned into the cruellest of jests is widely known. Instead, let us recall them in their days of glory: so brave, so handsome, so young – the laughing hussars of the sky. I think the difference between our two countries is this. If I were not English, I should want to live as a Pole. If the men of 303 Squadron were not Polish, they would not have wanted to live at all."

Please contact Kasia & Marian
at (608) 836-8632 or This email address is being protected from spambots. You need JavaScript enabled to view it.
so they can set up chairs